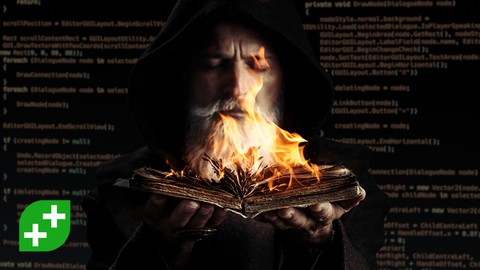 Implement a Dialogue Editor and Quest System and integrate it into an RPG project.

Using Unity 2020.1, we’ll show you how to include two essential game mechanics, dialogue and quests, in your games. This highly acclaimed series was over 200% funded on Kickstarter, and is designed for intermediate users of Unity. We recommend you take at least the first half of our Complete Unity Developer 2D or 3D, or equivalent, as a prerequisite.

You can use the dialogue and quest systems together or independently in any game or project you build. We’ll be using an RPG as an example. You don’t need to have completed the previous parts of the RPG Series (the RPG Core Combat and Inventory Systems courses) but it will give you an advantage if you already have. The course is project-based as we believe this is the best way to learn Unity and C#. You will not just be learning dry programming concepts, but applying them immediately to a real RPG as you go.