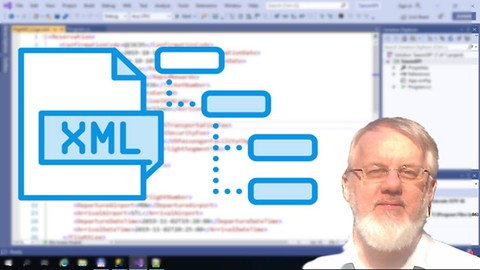 This course is for Microsoft developers who want a well-rounded approach to XML on the entire Microsoft product-line. It is based on my 19 years of consulting and teaching XML and B2B/Integration. To be a well-rounded developer or architect, you need to be aware of all these features; and that’s especially true for BizTalk and Integration Developers.

In addition to learning XML, you will learn XPath, XSLT (Extensible Stylesheet Language – used to map XML to another XML or HTML), and XQuery. The course shows what is possible with the Microsoft .NET libraries, and what additional features are available by using the third party Saxonica .NET libraries. You will learn how to create and understand XSD Schemas, and how to validate an XML file against a schema.

The programming languages covered as they relate to XML are C#, PowerShell, and T-SQL. You will learn how to read and write XML, and how to navigate and find elements and values in the XML, and how to modify the XML (for example, adding new elements or new attributes).

C++ Programming Step By Step From Beginner To Ultimate Level