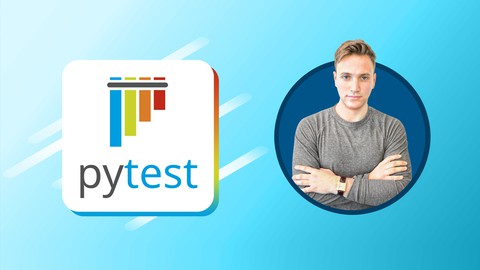 This is a MUST course for anyone who cares about testing. I teach the ins and outs of pytest while building a real world django application (including a continuous integration system in bitbucket). In this Real World Python Test Automation with Pytest (Django app) course we will build a very simple django server, I will teach just enough django so that we will be able to build the application, and then focus on testing it. We will together test the application from all angels – Unit tests, integration tests,API tests, end to end tests ,performance tests with (a total of over 40 tests)

You will end up with a complete CI system that integrates bitbucket cloud pipelines, slack messaging and allure reporting. Every time we will make a push, the CI system will run our tests and will notify us if the build passed/failed. In this Real World Python Test Automation with Pytest (Django app) course we go in depth and we will even implement together (from scratch) some of pytest’s features so that we will know what happening under the hood when pytest is running our tests. This is not an entry-level course, basic knowledge of python is needed