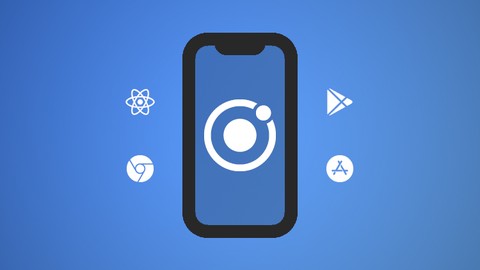 Create mobile web apps and native Android/iOS apps from a single code base with React, Ionic Framework 5, and Firebase.

Ionic React lets you build mobile websites as well as native Android and iOS apps from a single code base, using familiar web technologies such as JavaScript/TypeScript, HTML, and CSS. This course will introduce you to Ionic step by step, starting from a standard React app and gradually adding more and more Ionic components.

Then it will guide you through developing a simple but complete app that includes some form elements and a chart (based on Recharts), and show you how to build this app not only as a mobile website but also as a native Android and iOS app with Capacitor.

In the latter sections, you will learn how to build a more complex application featuring page navigation / routing and integration with a Firebase backend, including handling user authentication, storing data in the Cloud Firebase database, and uploading user-generated files to Cloud Storage. This course is based on version 5 of the Ionic Framework.